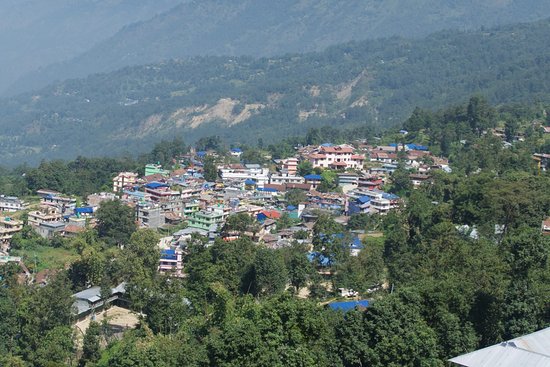 Fungling is a municipality, and district headquarter of Taplejung district, Province no.1, Nepal. Fungling municipality was previously known as Taplejung municipality. It is situated at an elevation of 1441 m. It rests on the slope of magnificent Mahabharat hills and this place is famous for its natural beauty and landscape.

It is a beautiful place surrounded by green forests. As it is the capital of Taplejung district there are a lot of beautiful houses. There are lots of hotels, lodges with many facilities to stay. It is the route to visit the Pathivara temple.

We can reach Fungling in two ways one is roadway from Mechi highway and another is from Airway. Buses and jeeps are easily available from Jhapa and the roadway is quite good. There is also an airport on Suketar where Plane lands from Biratnagar and Kathmandu.

It is the main bazaar of the Taplejung district where there are lots of shops, mainly clothes shops. There are different banks and ATM service is also available there.

The local people of that area are Chhetri, Brahmin, Limbu, Tamang, Sherpa, Newar, and Gurung.

This place has a subtropical climate with dry and cold winters and rainy summers.

This place is famous for its landscape and natural beauty. It is also very famous as it is the place from where people hike to Pathivara Temple (3794 m), which is the holy temple.

Places to visit and Explore:

There is a view tower/viewpoint from where a beautiful view of the Fungling bazaar and other villages around there is seen clearly. The statue of 18 people who died in a helicopter accident is also made there. There is also a telescope in the viewpoint through which the views are seen more clearly.

We can explore the Limbu culture, their traditional dance like dhaan dance and songs. There is also a Gumba called Bhote Gumba which is very beautifully constructed and decorated. There is also a statue of Gautam Buddha on the gumba. The place is very peaceful and silent.

There is a place called Siddhi Danda which is within a distance of 10 min from the Bazaar area. There is a beautiful and clean pond in that place and near the pond there a small Naagthan where people worship. The area is protected and Park is made around there. It is a very peaceful place.

There are many beautiful villages on the outskirts of the Fungling Bazaar which are amazing and visitable places that are still not noticeable as a tourist destination. There are also lots of shops that sell the local products of Taplajung districts like its sells handmade clothes, pure honey and ghee, Khukuri, local alcohol mixed with different herbs, and many more things.

There is also a shop which sells coffee which is not made by machine, it is handmade coffee which tastes very good and different from normal coffee and is popular over there.

surendra - December 23, 2022 0
Fungfunge Waterfall is a popular tourist destination located in the Taplejung district of Nepal. This multi-tiered waterfall cascades down a rocky cliff, creating a...

As a small effort in this global campaign, the website www.landnepal.com was started by registering a firm called “Land Nepal” on the initiative of some youths living in Biratnagar Nepal. Although many websites have been launched so far to promote private tourism business in Nepal, our aim is to highlight and promote each and every place of the country including underrated places as well as cultures and tradition of almost all the ethnicity.